FINALLY. A project that even I could handle without messing up (I got pretty close though, but that’s neither here nor there….) No sewing machines or sanding required (hallelujah). Just some foam, fabric, scissors, and a staple gun.

Before we get started, let’s discuss that fabric. This is where I almost failed before I even began. I don’t know about you, but I can probably count on one hand the number of times I’ve been in a fabric store, and the majority of them were with my mom that time we went all over town to find the purple and gold fabric for my 5th grade Cottondale Tigers cheerleading uniform (I know, right? Whose idea was that?? #RTR)

I’m TERRIBLE at picking things out (see any previous post). It’s not that I’m indecisive. I’m just clueless. Literally.Clueless. I figured fabric for a chair seat would need to be of a thicker variety (it’d be my luck that I’d get home with something thin enough to see through…). I also knew I wanted to keep the overall look of the set clean and calm. Think French Cottage/Shabby Chic (that’s the extent of my design buzzwords so I hope you get the picture). There’s also that strange fabric rule that crafters just seem to ‘know’ while the rest of us find out the hard way. The one about everything being measured in yards (but a yard is not necessarily a square yard as I learned when I brought my upholstery fabric roll to the counter to be cut. WHERE IS THE MANUAL ON THIS STUFF?!)

On top of having no real idea of what I wanted or needed, the one fabric store left in town was having a Going-Out-of-Business sale. Which meant that in addition to my cluelessness, the place was PACKED. I’m almost positive if your grandmother didn’t answer her phone that Saturday, I could tell you where she was. And to make matters even more stressful, there was stuff EVERYWHERE. Remnants, samples for sale, clearance signs on every aisle…. If I hadn’t been so excited about this project, I would’ve immediately done a 180 and hightailed it back to the mama bus.

But life is all about stepping out of your comfort zone, right? So I battled the bitties and walked around aimlessly for a while hoping a fabric would yell at me to take it home. And in true Jessica form, I ended up picking a pattern completely different than what I originally had in mind. I’m also 73% sure that it’s outdoor water-proof furniture fabric but at this point I.Do.Not.Care.

Let’s get to that easy part I talked about before I give myself a fabric-store induced anxiety attack. 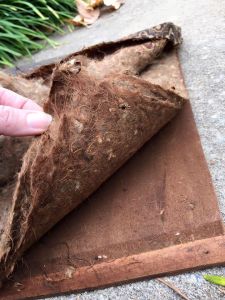 If you’re reupholstering a new-ish chair, this step probably isn’t necessary. It depends on whether or not you can use (or want to use) the existing chair cushion. My chairs are close to 100 years old and when the existing fabric was removed, we got down to a layer of what can only be described as a nasty mess of hair and…stuff. I know this was the norm back in the day and it was actually pretty cool to examine from a historical perspective, but there was no way I wanted to have to consider what my bum was resting on each time I tried to eat a meal. Also, if the chairs are coming from a smoke-filled or just generally nasty environment you might want to consider replacing the cushion.

Fabric stores actually sell pre-cut squares of foam to use, but they were more than I wanted to spend so I found the massive roll of foam, hauled it to the counter, and had the clerk cut the total yards I needed. Since it was only 1/2″ thick, I decided to get twice as much so I could double it up and have a slightly softer chair.

Accountant or not, I should never do math in my head. When I got home and layed the seats out before I started cutting (which I would always, ALWAYS, recommend you do to make sure you don’t need to turn them a different way to make them fit, etc), I had just enough with NONE to spare. Not sure what happened to the “extra” I thought I’d calculated. 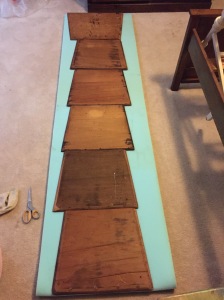 Basically all you need to do with the foam is use your chair seat as a template and cut pretty close to the edge. If I’d had more foam, I would have cut a little farther away from the edge because the last thing you want is for the hard seat to stick out farther than the foam once you get your fabric on (we’ll let the kids use those chairs….)

I just used regular kitchen scissors to cut, which didn’t make the prettiest edges, but they got the job done. Also, since there was a very real possibility that each of my seats were a slightly different shape, I used each one as its own template. However, I’m sure you could get away with making one template and cutting them all at the same time for efficiency purposes if you have newer chairs.

This step takes a tiny bit more brain power, but not much. You need to make sure you have about 3 inches beyond the edge of your seat all the way around. This number can be adjusted up or down depending on how thick your cushion 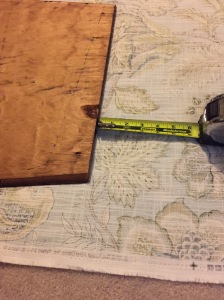 is. I’m kind of embarrassed to tell you how long I spent drawing this out and trying different arrangements of the seats to figure out how I could get the least waste out of my fabric (I was determined to try to make a runner or centerpiece mat out of the extra.) I finally gave up and just started cutting. Regardless of how fancy you get with your fabric layout plan, I WOULD make sure that whatever approach you take won’t result in you being short material in the end. Ain’t nobody got time to run back to the fabric store.

Step 3: Haul Out the Big Gun

Staple gun, that is. This was the first time I’d ever used one and I gotta say…it was oddly satisfying. It took just enough effort that I had to really commit to each squeeze, but not so much that I had jelly arms afterwards (well, I DID have jelly arms but I blame that on my Mtn Dew addiction, not muscle fatigue). 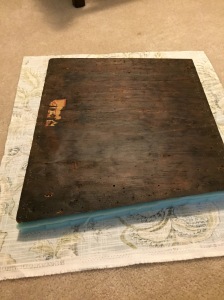 Take your seat and the foam, flip it face down on the fabric (which is also print-down obviously), then start popping those staples in. Everything I read recommended starting on the front and back sides stapling from the center and working outward. Take the fabric and pull it around snuggly to the under side of the seat. Pop a staple in about 1/2″ to 1″ from the edge. Then go to the opposite side and do the same. 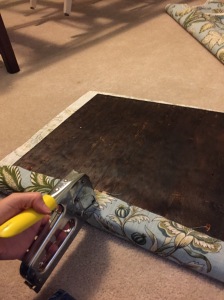 As I moved outward, I’d take my hand and brush it across the fabric of the seat to make sure it was smooth and that I wasn’t stapling any bunches or wrinkles in as I went.

Once you get the front and back, use the same process for the sides. When you get to the corners, I pulled the corners down first and then brought the sides down to close it off (think wrapping a present).

Attach the newly reupholstered seat to the chair and BAM! Project complete. Not a ton of work for such a significant impact in my opinion. Too bad the fabric store gave me nightmares or I might consider grabbing more material and finding different chairs that need saving.

Be sure to check out the complete before and afters of the 1920’s Dining Room Table set that I’ve been working on that will HOPEFULLY be finished at some point in my lifetime.