I recently had the opportunity to travel to Everett, Washington (about 40 miles north of Seattle) for a work conference. I’m not an experienced traveler by any means and I’d NEVER traveled alone before. What exactly does one do all the way across the country slap by themselves? Can a woman eat at a nice restaurant alone without looking like an escort waiting for her next client (hub’s words, not mine)? Should I just plan on 4 nights of room service and watching hotel television? McDonald’s value meals in my rental car?!

I posted the question on FB and let me just tell you….people are PASSIONATE that yes m’am I could and SHOULD get out, go do, and eat alone at restaurants as many times as I could fit into the trip. The food will be great! I’ll be able to go wherever I want and make my own itinerary! Traveling alone will be addicting!

Here’s the catch…I’m the kind of person who would be 100% perfectly content to find a local food delivery service and not leave the hotel room for any reason other than my conference each day. In fact, as a mom of three precious (but highly umm…energetic) kiddos, the idea of a quiet hotel room with absolutely no demands other than setting the alarm for the next day sounded just about perfect to me.

But I couldn’t shake the feeling that maybe that line of thinking was my excuse to avoid being in potentially uncomfortable social situations (if you know me or have read any of my other posts, you know I can be a little awkward). My anxiety kicks in just thinking about walking into a room full of people that I don’t know. But I also knew that I would kick myself all the way back to Alabama if I let a little fear keep me from experiencing a part of the country I’d probably never get a chance to travel to again. This trip was shaping up to be a battle between The Ultimate Hermit Retreat and a Step-by-Step Guide to Comfort-Zone Stretching.

So just as one does in a long-lasting marriage, I compromised. I booked an early flight for my travel day so that I’d get to Seattle with enough time to cram in a bunch of sight-seeing, food-tasting, and general walking around. Since my hotel was thirty minutes to an hour north of the city depending on traffic, I researched nearby restaurants and things to do that wouldn’t require me driving back into town (which was a good decision cause I-5 turned out to be cray-cray y’all) and decided I’d play the afternoons by ear. That way I could indulge in some of that precious hermit time if I needed it.

I was PUMPED. This trip was happening. I was heading into the unknown. I’d made my itinerary. I’d printed google maps and directions from every possible start and end location I could fathom (you laugh but wait until your phone is dead and you don’t have the first clue what street to turn onto next). I was ready.

But first I had to get there….The monsoon on the way to the airport should have been a classic case of foreshadowing. When getting TO the destination is so mentally exhausting that it warrants its own RECAP you know you’re in for a long week.

My first stop after arriving in Seattle was Pike’s Place Market. (Heads up that if you ever catch yourself driving in downtown Seattle, not ALL of the traffic lights will be hanging across the intersection where normal people look for them. Apparently SOMEbody thought it would be a great idea to hide a few of them on poles on the side of the road….just passing that along since zipping through redlights is generally frowned upon in all 50 states.)

This was probably the place I was most excited to explore. The Market has a great website that includes a map for a self-guided walking tour with the history of each stop. Um…hello?! Cater-made for those of us who want to explore but don’t want to have to interact with anyone to do it. This should have been a leisurely few hours of ambling around, following my map. Note for next time: always orientate ones self with where the parking deck is in relation to said map. I spent a full 30 minutes just trying to figure out where the heck I was and how to get to stop #1 (I never figured it out btw). I’m 100% blaming this lack of navigational skills on the pent up anxiety of spending the previous 11 hours traveling. Under normal circumstances I’m sure I could’ve SLAYED this walking tour once I found the starting point….*sigh*.

I finally stumbled upon something that looked familiar from my pre-trip research but by that point I was tired, hot (yep, HOT. In Seattle. Did I mention they had a heat advisory during my trip?! Did I dress for heat? You know the answer to that…) and I no longer cared a thing in this world about taking a picture in front of the gold piggy bank or the gum wall. I wanted something cold to drink, something to eat (since I’d somehow completely forgotten any nourishment that day), and a place to sit down.

So I wandered around, hoping a place would jump out and yell EAT HERE. Unfortunately my internal navigator was definitely broken because I swear I couldn’t have walked in worse directions if I’d meant too. The only pub I found that looked like it might have food I would eat was so stinkin’ loud that I couldn’t make myself go inside. I was to that point in the hungry-cycle where loud noises hurt your head, unknown food smells make you a little queasy, and your mouth is so dry you can’t swallow. I ended up down by the water somehow but by that point I’d basically missed everything in the Sunday afternoon “close-earlies”.

While I stood still under a ginormous ferris wheel beside yet another closed ice-cream stand, I realized my legs were trembling. Literally shaking. Whether from dehydration or low blood sugar I have no idea but that sealed the deal for me. I walked as fast as my wobbly legs would take me back to the car, turned the AC on full blast, and went in search of my dang hotel room so I could order some food and call it a day. At that point, if I never made it back into the city to check off all those other items on the itinerary I.did.not.care.

As if fate knew I couldn’t take one more thing that day, I pulled up to my hotel and Y’ALL…. HEAVEN. I didn’t even make it inside before I started taking pics. Growing up in Alabama I’m used to water. There’s always somebody’s lake house to go to or beachfront condos on the coast, etc. But this? I’m almost positive that the water went UNDER the hotel. It was an absolutely stunning backdrop. I’d booked a room with a view (but again, at the Gulf beaches that sometimes means you might be able to see a sliver of water if you lean out far enough past your neighbor’s balcony) so I didn’t have high expectations. 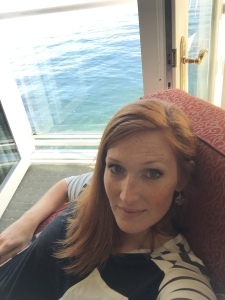 HOWEVER, I had a completely unobstructed view of the water with french doors that I ended up keeping open 90% of the time just so I could hear the water splashing on the board walk and feel the breeze. And you better believe I scooted the little chair and ottoman over to them and parked my bum there every chance I got. I MAY have even cut the AC down low enough that I could turn the fireplace on a few times… It was the kind of relaxing atmosphere where I didn’t need anything to keep me occupied. (It wasn’t until I got home that I realized I didn’t cut the tv on once in five days.) Seriously, if you are ever in the area or live within 3 or 4 hours of it, I would HIGHLY recommend this place as a weekend getaway.

No matter how much I didn’t want to get back out that first night, I had to eat and there just so happened to be an outside seafood vendor right beside the hotel. A to-go order of fish and chips, a side of slaw, and the largest coke they had on the menu later, I was finally able to put on an oversized tshirt, get rid of the bra, and relax for the first time in almost 20 hours.

Unfamiliar room or not, I slept like a baby that night.