Greetings! What do you do when you’ve hand sanded so long that your arm feels like jello and the thought of lifting a paint brush makes you want to cry?? You deconstruct the chair seats!! 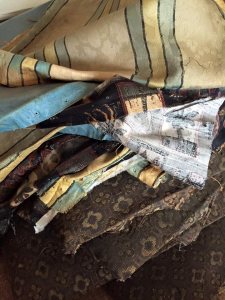 This was supposed to be my take-it-easy day, but THE NAILS y’all (scroll down for a pic of these tiny boogers…). Honestly though, this was by far my favorite part of the process yet. I could tell there were several layers of fabric to be removed, but I totally got sucked into the history of it all. When did the table go through each transformation? Is this really blue leather?? And WHAT THE MESS IS THIS SEAT CUSION MADE FROM?!?

So let’s begin, shall we?

When I got the table, it was a yellow-ish color with these camel/palm tree seats (I know we all remember when THAT was the look).

The fabric was attached with your basic staples. It might have been because there were so many layers of material, but those bad boys popped right out. I’d planned to use a flathead screwdriver to wiggle them up and then some needle-nose plyers to grab and pull, but almost every one lifted out with minimal effort when I got the screwdriver  under them. 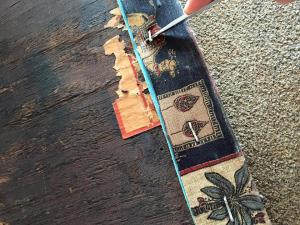 Up next was a fabric that instantly transported me back to my childhood. You’re lying if you try to tell me your house NEVER had some sort of navy/mauve combo. For us it was the bottom half of the dining room (you know, the wallpaper under the chair rail) and a living room set that my parents JUST decided to part with. These colors were EVERYWHERE so I wasn’t surprised to see that the dining room set had a stage of them also.

But then we get to THIS.

I’m not even sure what to say about this layer. Is it leather? Pleather?? 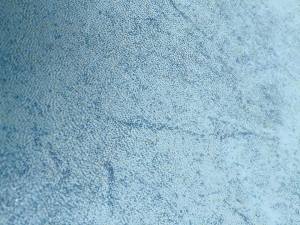 It’s definitely blue. What era did the table have these seats I wonder? I mean, I guess if it was pleather it’d make cleaning up spills a breeze, yes? This was the first layer I got to that was attached with nails so if any of you history buffs want to look that up and get back with me on a date…. 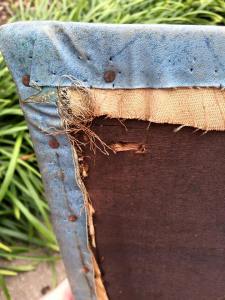 Fortunately, the handy dandy screwdriver was still pretty effective at popping them out so it didn’t take too long to get these bad boys off.

The fabric under the blue stuff is probably my favorite. I can totally imagine how awesome the set looked with this fancy material. And the colors are something that I wouldn’t mind having TODAY. Clean, soft, and pretty (you know, back when it was clean…).

I’m guessing this might have been around the time that the table got its first coat of white paint. 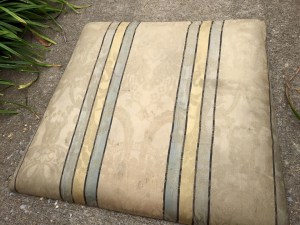 Finally, we get to the original stuff. How do I know it’s the original layer? Because I have serious doubts that someone would have recovered the chairs and left THIS underneath (the picture does not do it justice.)

As much as I love history, the cusion will be updated with something a little less….hairy. I will be more than happy to ship the stuff to anyone interested in analyzing it further. 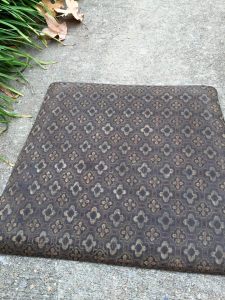 So getting back to the fabric, this original layer looks OLD. The weave is different, the pattern looks like something you’d see in a museum, etc. Altogether, I was super giddy to see this.

And then I turned it over and found the nails….YOU GUYS. The worker that covered these chairs must have gotten scolded for being lazy the week before and overcompensated for it with these. He was probably like, “Call me lazy again, bruh”. And 100 years later a poor ginger in Alabama has shredded hands trying to get all 800 of the worlds tiniest screws out.

So that’s it. I totally fell down a rabbit hole with this fabric and got nothing else accomplished but it was a heck of a lot of fun to daydream about what life was like during each of the looks. And if you can’t have fun, why do it in the first place, right?